Environmental NGOs have also heard that these amendments have come into force following back-room negotiations between the hunting federation, the Environment Minister and Parliamentary Secretary since 2013.

Am I surprised? Not much! But only because I’m cynical and have no faith in most politicians. If I was one to expect common decency or even logical actions from politicians then not only would I be disappointed but also very much surprised by this move. 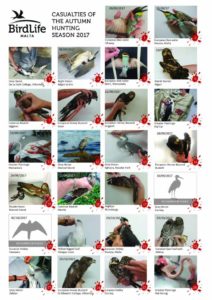 You see, since the opening of the Autumn hunting season – 1st September –  more than 45 protected birds have been shot dead and many more have been injured by hunters.

Another time, in another universe, the season would have been closed by now, not because all hunters are to blame but because it is the only way to protect more protected birds from being killed or injured.

Clearly enforcement is not working; there isn’t enough manpower to stop the massacre, and until then, it should be lives, not hobbies and traditions, that should be protected.

But of course, many will argue that these are not human lives, and therefore count less – a reply to which is unprintable!

During a meeting with Parliamentary Secretary Clint Camilleri, last Monday 23rd October (only 4 days before this shameful extension was announced), Carina Camilleri asked Hon. Camilleri how he could possibly be an advocate for animal rights when he himself is a hunter.

He explained that he never quite hunted much, though he is a licensed hunter. He then went on to say that his passion is actually trapping… like that makes it better!

Carina explained that trapping is essentially the cruel act of trapping a wild bird and sentencing it to a life in prison, and that the ‘hobby’ does not sit well with someone who’s supposed to be looking out for animals and their welfare. But the Honourable Clint Camilleri justified this by saying that most trappers have an aviary and that trapped birds are only put in small cages for the duration of the season and then released into a bigger space.

I will leave the scrutiny of that reasoning with you, especially now that you can also balance it with this latest decision to prolong hunting and trapping times at Majjistral Park.

In the meantime, all we can do is to keep up the pressure. Sign this petition today.