This is why I still can’t go away

By Alison Bezzina December 16, 2019 No Comments

This article was first published on The Sunday Circle Magazine on Sunday 15th December.

As the festive season approaches, animal sanctuaries are bracing themselves for the influx of gifted puppies that they know will be abandoned once the holidays are over. 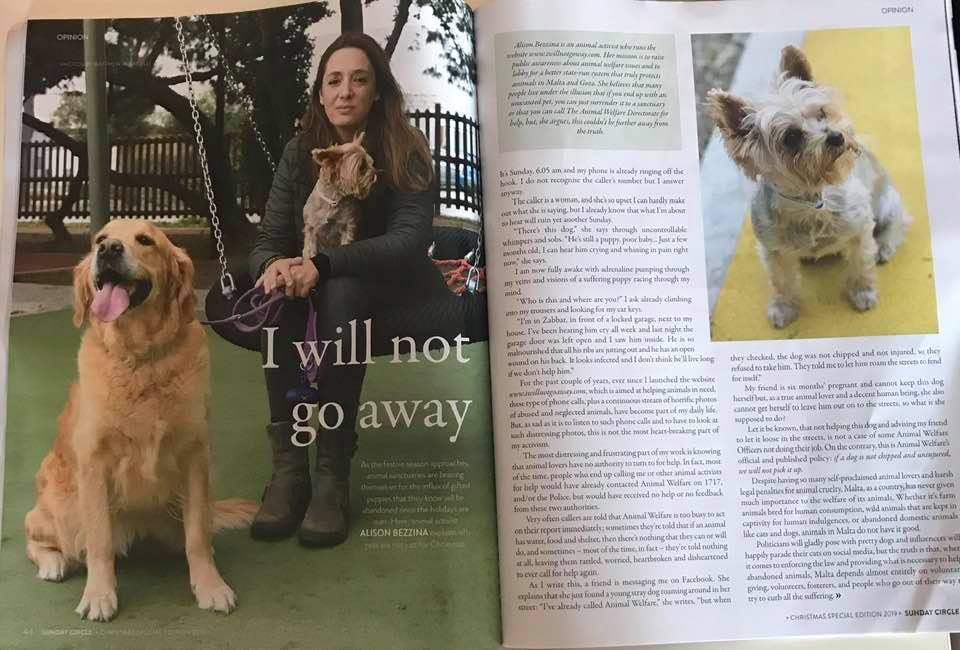 Alison Bezzina is an animal activist who runs the website www.iwillnotgoway.com. Her mission is to raise public awareness about animal welfare issues and to lobby for a better state-run system that truly protects animals in Malta and Gozo.  She believes that many people live in the illusion that if you end up with an unwanted pet, you can just surrender it to a sanctuary or that you can call The Animal Welfare Directorate for help, but, she argues, this couldn’t be further away from the truth.

It’s Sunday, 6:05am and my phone is already ringing off the hook. I do not recognise the caller’s number but I answer anyway.

The caller is a woman, and she’s so upset I can hardly make out what she is saying but, I already know that what I’m about to hear will ruin yet another Sunday.

“There’s this dog,” she says through uncontrollable whimpers and sobs. “He’s still a puppy, poor baby… just a few months old; I can hear him crying and whining in pain right now,” she says.

“Who is this and where are you?” I ask already climbing into my trousers and looking for my car keys.

“I’m in Zabbar, in front of a locked garage, next to my house. I’ve been hearing him cry all week, and last night the garage door was left open and I saw him inside. He is so malnourished that all his ribs are jutting out and he has an open wound on his back. It looks infected and I don’t think he’ll live long if we don’t help him.”

For the past couple of years, ever since I launched the website www.iwillnotgoaway.com, aimed at helping animals in need, these type of phone calls plus, a continuous stream of horrific photos of abused and neglected animals, have become part of my daily life.  But, as sad as it is to listen to such phone calls and to have to look at such distressing photos, this is not the most heart-breaking part of my activism

The most distressing and frustrating part of my work is knowing that animal lovers have no authority to turn to for help.  In fact, most of the time, people who end up calling me or other animal activists for help, would have already contacted Animal Welfare on 1717, and/or the Police but would have received no help or no feedback from these two authorities.

Very often callers are told that Animal Welfare is too busy to act on their report immediately; sometimes they’re told that if an animal has water, food and shelter then there’s nothing that they can or will do, and sometimes, most of the time in fact, they’re told nothing at all, leaving them rattled, worried, heartbroken and disheartened to ever call for help again.

As I write this, a friend is messaging me on Facebook. She explains that she just found a young stray dog roaming around in her street.  “I’ve already called Animal Welfare,” she writes, “but when they checked, the dog was not chipped and not injured, so they refused to take him. They told me to let him roam the streets to fend for itself.”

My friend is 6 months pregnant and cannot keep this dog herself, but as a true animal lover and a decent human being, she also cannot get herself to let him out on to the streets; so what is she supposed to do?

Let it be known, that not helping this dog and advising my friend to let it lose in the street, is not a case of some Animal Welfare Officers not doing their job. On the contrary, this is Animal Welfare’s official and published policy –  if a dog is not chipped and uninjured we will not pick it up.

Despite having so many self-proclaimed animal lovers and harsh legal penalties for animal cruelty, Malta as a country, has never given much importance to the welfare of its animals.  Whether it’s farm animals bred for human consumption, whether it’s wild animals that are kept in captivity for human indulgences or whether it’s abandoned domestic animals like cats and dogs, animals in Malta do not have it good.

Politicians will gladly pose with pretty dogs and influencers will happily parade with their cats on social media, but the truth is that when it comes to enforcing the law and providing what is necessary to help abandoned animals, Malta depends almost entirely on voluntary giving, volunteers, fosterers, and people who go out of their way to try to curb all the suffering.

As I write this, all our animal sanctuaries are full to the brim, and that the government-run, tax-funded animal compound in Għammieri, is not only full but also in a state of disrepair and despair.

I receive an average of two or three complaints a week about the Government’s so-called Rehoming Centre in Għammieri. Only last week, a man contacted me claiming that his perfectly healthy dog was seized by animal welfare, allegedly because it was being kept chained. The man claims that his dog is only chained temporarily and when Animal Welfare seized the dog he advised them that the dog will only eat raw food. Sadly this owner was not allowed to send food over and in just a few days at the state-run Għammieri compound, this perfectly healthy dog had lost so much weight and got so sick, he was on the brink of death. So much so that after five days, the dog was voluntarily returned to it’s owner by Animal Welfare.

Unfortunately, in this politically heightened environment that we find ourselves in, some will quickly assume (wrongly) that I have it out for the Government or the Ministry responsible for The Animal Welfare Directorate, but a 10-page report published last April by Magistrate Denis Montebello, the Commissioner for Animal Rights, corroborates all of this.  The report was commissioned by Minister Jose Herrera – Minister for the Environment. Here are some extracts from that report:

“…facilities at Għammieri are absolutely inadequate and no amount of patchwork refurbishing or cleaning sprees, will ever get this archaic facility up to the minimum standards required. In fact, any administrator of private facilities operated in the same way, would, or should be investigated and prosecuted….” Magistrate Denis Montebello, the Commissioner for Animal Rights

“If we are not very alert in stemming this tide of disregard to animal welfare, we might end up having to accept the reality of what one contributor on social media stated in jest that, “what is a worse fate for any animal suffering an inhumane and cruel treatment is to be rescued by the Animal Welfare Directorate.” Magistrate Denis Montebello, the Commissioner for Animal Rights

If you’re a true animal lover, you’re probably still wondering what happened to the dog in that garage in Zabbar. Well, it’s now been three weeks since that woman called and in view that the puppy was on private property, we had no choice but to insist with Animal Welfare to take some form of action. The woman even offered to adopt the dog, but unfortunately, Animal Welfare simply advised the owner to tend to his dog’s needs, and left him there.

The next day the dog was gone.  And now, after weeks of worrying, and chasing Animal Welfare for information, we still don’t know where the dog is, if he is all right or even if he’s still alive.

Whilst everybody nods at the slogan ‘dogs are not just for Christmas, but for life’, not many understand and accept that the life that our pets deserve is not one where they are locked up in a pen all day, or stuck in a garage or on a rooftop. It is easy to give or get a pet on impulse but please stop and think, because in Malta, if you get it wrong, there’s almost no one to turn to for help.

But of course, tis the season to be jolly, so here are a few things you can do to help abandoned animals this Christmas.