This chained dog is still waiting for his honour

Thanks to Hon. Clint Camilleri’s dragging of feet, yesterday Arist Cordina and his girlfriend Pat Briffa experienced the horrid ordeal of finding a chained dog in despicable conditions and not being able to do a thing about it.

These videos show the conditions this dog is being kept in.

This recording explains the run-around that Arist Cordina was given when he tried to turn to the authorities to help this dog out without breaking the law himself.

In the meantime the Commissioner for Animal Rights Emanuel Buhagiar received this same complaint from another user and asked Animal Welfare to act immediately. At the bottom of this blog you’ll find an update following a visit from Animal Welfare this morning (Sunday)

This is a transcript of the first part of this audio:

At around 5:40pm yesterday (Saturday 7th April), we were passing from near the Loreto Chapel, I went walking with my dog, we noticed a barking dog behind a relatively low door, I lifted myself up to have a look, thus not breaking any laws by trespassing, and I saw this dog on a chain. At that point, I did nothing. When we came back to the car, the dog was still there, chained to the same chain. And at that point I decided to take a video and see how I can help this dog.

I called 1717 but nobody answered. I called Animal Welfare, or perhaps if I’m not mistaken it was Animal Abuse, but the mobile was turned off, at that point I found the mobile for the Animal Ambulance. I called, and the person who answered told me that it couldn’t be that I called 1717 because it is diverted on to her mobile. Anyway, I told her what the situation was and asked her to direct me on how to help this dog. She told me to post the video on RUBS Puppy Love. Clearly their authority is only exerted if there’s enough pressure from the public, to say ‘oh poor dog’, or perhaps their boss feels a twinge in his heart for them to be sent on site. I did that (posted the video on RUBS Puppy Love), people started to respond; in the meantime we managed to get a mobile number of Emanuel Buhagiar, whom I don’t know, but seems to be someone in authority in the area of animal welfare. I spoke to him on mobile and he asked me to send him the video on email and that he would answer me. The video was too big to send it via email, so I sent it to him via WeTransfer, but no response came from Emanuel Buhagiar, up to now, up to when I’m recording this message (8th April 9:30am). People kept insisting and trying to see how they could help this dog. In the meantime I left and went to Mellieha. At around 8pm I called the Luqa Police Station because I had got a call from my own personal vet (when he saw the video) and told me to file a police report so that the police will be able to send AW officers on site. I called the Luqa Police Station but they told me that that area falls under the jurisdiction of Zejtun so I called the Zejtun Police Station. No sorry, before I called the Zejtun Police station (allow me to correct myself), I called the Animal Ambulance again to see if something was done about this dog; this time I spoke to a different person than the one that I spoke to at 6pm; She told me that they will go to check on the dog in the morning. I told her that the dog has no food or water, so they should go this evening because the place is accessible to lower a small bucket of water so that at least the dog would have what to drink till the morning. She told me ‘I don’t come here as a hobby, I come here, to wear a uniform and to get my salary.’

So her interest to do what she instinctively signed up to do as her work was zero. I told her that if she went to the police they were ready to help. You can bring a police car with you and they would be witnesses that you did not trespass onto other people’s property, because you don’t need to trespass because the door that separates the dog from the street is only about a meter and half high. Anyway, when I didn’t see any co-operation I called the Zejtun Police Station. When I explained the situation to the policeman on the phone, he told me to go over to the station to speak to the sergeant, so that “I could perhaps accompany you onsite.’ We dressed up again, left from Mellieha, we stopped at Luqa to get a small bucket and water from a garage and I had a rope in the car. First I went back to the site to check if the dog was still there. The dog was still there. The indoor gate was now closed so the dog had even less space to move around, and he was still chained. At this point I couldn’t tell if the dog had other ways to escape. This time he was petrified. He wasn’t angry like before. As soon as he saw me behind the door he ran inside. There was a food bowl that was turned over so I can’t tell if he ate or not, and there was a very very small water bowl, the size of a tomato preserve tin in the corner as you can see in the video. I took the video so that I could show the police what the situation was before we go on site with them. We went to the Zejtun station, I showed them the video and he told me that he could come with me but that there was a problem, even if I had to file a report. He explained that with the law as it stands today, the owner is not in the wrong. The dog does not look like he’s not being fed and the law about the chaining of dogs has still not passed……

Animal Welfare went on site twice this morning. The second time they found the owner and they feel satisfied that the dog is well taken care of. They gave the owner the following suggestions:

The chain will stay because otherwise the dog will run away, and because it is still legal to keep a dog chained instead of fencing it off to limit its movements more humanely.  Animal Welfare will be re-visiting the site tomorrow. 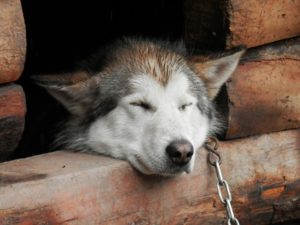 Last year, the Parliamentary Secretary for Animal Rights, Hon. Clint Camilleri promised on national TV to make the permanent chaining of dogs illegal. He promised this on national television on Moira Delia’s Animal Diaries and went as far as to solemnly promise to pass this law by EARLY 2018.