The week that was – 3 successes to celebrate

It’s been one hell of a crazy (good crazy) week in our world of fury friends and families. Three amazing outcomes achieved last week.

Eight makeshift cat shelters had been in this garden for years on end, providing some shelter from the cold, wind and rain to a couple dozen cats. Then suddenly, on Monday morning, one of the coldest days this year, they went missing leaving the cats in the lurch. As soon as this website was informed about this, I tried to contact the B’kara local council to find out if it was responsible for the shelters’ removal. Unfortunately, no one, not a single councilor (from both sides of the political game) nor employee, knew what I was talking about. They all claimed not to have been consulted about the matter and instructed me to contact the Mayor Joanne Debono Grech directly.

So that’s what I tried to do.

I called the local council’s landline, the Mayor’s personal mobile, sent her an SMS, contacted her on Facebook via her wall and via messenger, I Whatsapped her, sent a an email on her personal account and also via the council’s, but to no avail – for all intents and purposes Mayor Joanne Debono Grech had vanished off the face of the earth.

At this point the neighbourhood’s animal lovers were up in arms and ready to replace the cat shelters out of their own pockets, but before we could do this, we needed to make sure that the council would not remove them again, hence why I really needed to speak to the Mayor herself.

More hours passed with another cold night looming, and that’s when I resorted to writing to the new Commissioner for Animals Denis Montebello and posting the ongoings of this saga on Facebook.


A day later, after countless messages, so much support from so many people, emails and phone calls to anyone who could help, Animal Welfare officials met up with Councillor Michael Fenech Adami and Claudine Alcock (who was representing the Mayor), in the garden itself and just a few hours later, the incredible happened – the Mayor publicly denied having removed the makeshift shelters and ordered the council to purchase two huge ready-made cat shelters from Borg Cardona. The shelters were set-up on site and a couple of hours later our cats in B’kara had a place to sleep and to take shelter from the cold and rain.  For anyone interested in doing this in their locality these shelters are under €400 off the shelf from Borg Cardona.
A day later these food and water feeders were installed in the same garden. And that’s how our cats in B’kara are now enjoying a five-star residence. 2. The Animal Welfare Directorate confirmed that upgrades are in fact happening at Għammieri

After having been called out by an ex-volunteer and this website about sub-standard conditions at Għammieri – Animal Welfare’s Official Shelter – the Government’s spokesperson for the Ministry, replied by denying everything and claiming that everything was as it should be.

But then, last week, despite the initial denial, the same Government’s spokesperson, Mr. Sean Schembri, confirmed that upgrades are in fact happening to improve the conditions of the animals kept at Animal Welfare. 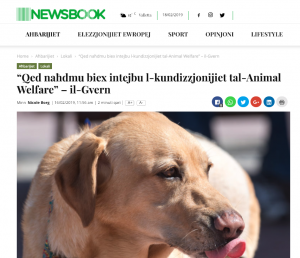 Although the spokesperson did not specify what upgrades are being done exactly, we have it on good authority that the temperature and bedding situation is being taken care of. Of course, for real animal lovers like us, this is only just so very basic so we will keep pushing for more in the coming weeks.

In addition the new Commissioner for the Better Treatment of Animals, Magistrate Denis Montebello also confirmed that following our report, an investigation was launched which resulted in a thorough clean-up of Ghammieri (Animal Welfare) as well as the start of urgent repairs.

3. Gin is reunited with her family

After having very mysteriously gone missing in Buskett on Valentine’s day, Gin the adorable 1 year old Shitzu was reunited with her family after four long and grueling days. This website was lucky enough to have been on site when she was finally handed over to her owners on Sunday morning. And to top it all off, Gin’s finders refused the €1000 reward and the owners donated the money to animal sanctuaries. 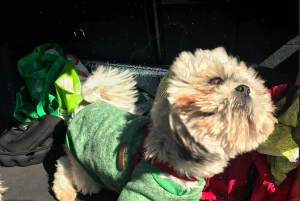