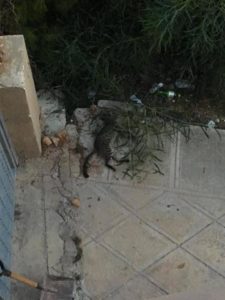 Following a meeting held with the Commissioner of Police on Friday 7th September, the Animal Defence League discovered that there are no official reports filed with the Police about the case of the alleged brutal killing of the kitten at a restaurant in Golden Bay.

The kitten was killed after it begged for food at a restaurant, on Sunday 12th August. Whilst the police received different versions on what happened from different people, no official reports were filed by witnesses.

The Animal Defence League is appealing to anyone who has any type of information even if they have already spoken to the Police, to contact the League who will be offering absolute assistance in all stages of the case.

League members together with their legal representative are also offering to accompany individuals while a police report is being made.

In addition, The Animal Defence League is offering a substantial financial reward to anyone whose information leads to the case being solved.