Here’s what we know about the PUMA that was spotted and recorded from a rooftop in Fgura last Thursday.

4. Luckily many media outlets, including this website, had already downloaded the footage, and LovinMalta went one step further and took their own drone footage of the Puma in its sad enclosure.

5. Despite the public outcry and rage, this poor Puma has been there for at least the past two years and is likely to remain there until its very last days.

6. You see, the Animal Welfare Council started discussing regulation of exotic animals in 2010, but it took them six years, that’s more than 2000 days of discussion to finally introduce The Dangerous Animals Act in 2016.

7. This law should have made it illegal to import a dangerous animal unless the owner was a licensed zoo, but left a nice little loophole for those who know how to go about it, to import wild and dangerous animals in the country.

8. This law requires that wild and dangerous animals are licensed and that keepers are to meet minimum standards of care.

9. Theoretically this means that keepers need the express authorisation of The Director of Veterinary Services, and that “a dangerous animal is kept in an adequate and safe enclosure that respects the same animal’s requirements including health, cleanliness and micro-climate.”

10. So ladies and gentlemen, whilst normal people feel sick at the sight of such a majestic wild animal pacing up and down in what looks like an inadequate enclosure and an environment that doesn’t even remotely resemble the rocky crags, forests, jungles and grasslands that these animals inhabit in the wild, according to the Director of Veterinary Services and the law that regulates him, the Puma is ok. In fact according to The Director of Veterinary Services, the Puma is registered and licensed, and meets the requirements laid down by the regulations.

As far as the authorities are concerned, case closed, but clearly whoever came up with these regulations is either ignorant of such an animal’s requirements or is conveniently and shamelessly closing both eyes to accommodate a few protected keepers. The chances are that it’s a bit, or a lot of both.

Oh and the cherry on the cake? The law, the one that took more than 2000 days to formulate, allows current licensed keepers to breed and trade their wild animals, creating a lovely lucrative niche in the market that is controlled by the few at the cost of these animals’ wellbeing and happiness. 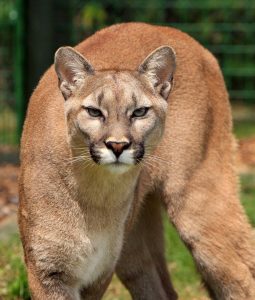 And if you’re still in two minds whether it’s right to keep a Puma in such conditions, because after all it’s all according to law, here’s some general knowledge for you – in the wild Pumas can cover a daily distance of 80 sq miles in the winter and 40 square miles in the summer. Whilst they tend to live solitary lives, a recent study (2017) showed that pumas have a secret social life. The footage captured by this study shows them sharing their food kills with nearby pumas and that they share many social patterns with more gregarious species such as chimpanzees. *