How many more Chiko’s have to suffer in vain before we pull up our socks ? 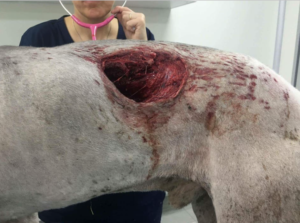 It’s been one of those months… not a day has gone by by without a case of animal neglect, abandonment, cruelty or abuse, hitting the headlines.

Everyone seems outraged and everyone is sad, but trust me, outrage and sadness won’t see any changes happen, not any time soon at least.

Animal rights and animal welfare have long taken a back burner in this country.  Ever since I was a child I had to fight tooth and nail against adults and then against authorities who would do nothing in the face of animal cruelty or neglect.

And now, that I’m hitting middle-age, the situation is not that different.

And as much as the authorities want us to believe that they are doing their best, we, the people, need to show them that we disagree, and also show them the extent of our rage for their inaction.

Remember  – as a country, as a society, we were able to go from being the most conservative, closed-minded bigots to the most liberal and tolerant in Europe; we were one of the first to introduce civil unions, gay marriage and gay adoptions, and lo and behold, we didn’t crumble under the disagreements.

We went from being a country with a long-running deficit to one of the very few European countries with a budget surplus.

And we went from being a country that could not even discuss divorce civilly, to introducing it in one smooth move, never to bother about it again.

These are clear examples that when leaders lead properly, people follow and change happens.

And yet, when it comes to animal conditions, welfare and enforcement, the authorities keep dragging their feet. Administration after administration has looked at animal cruelty and abuse straight in the face and got on with its business.

The responsibility to make change happen lies squarely on the shoulders of the relevant authorities – the Police Force, Animal Welfare, the Law Courts, the relevant Minister, Parliamentary Secretary,  the Prime Minister – but it is the people’s responsibility to let them know that this is something that needs their full, undivided and immediate attention.

Here are the top people we need to make our voice heard to :

And here are some template letters/emails that you can use to build your own letters.

The Power is Yours – use it!