These dogs have been seized by animal welfare and legal action should be taken against their owner.

Last week Hon Clint Camilleri announced that there is going to be an amendment to the law that will permit higher penalties against acts of animal cruelty.

Awesome news, right? But wait. Before you rejoice you need to know the reality of the situation.

In fact you need to know how these penalties are absolutely useless, how the law is not the problem, and how politicians and authorities are just trying to blind sight us with lip service.

You see, the truth is that the system has been designed in a way to make it almost impossible to accuse anyone of cruelty, let alone prosecute and fine them!

Here’s just one example that I witnessed first hand this week: 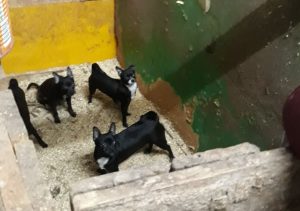 1.Six months ago these very unlucky Chihuahuas were born

2. They were most likely a result of overbreeding, inbreeding and an uneducated farmer, come breeder.

3. Ever since they were born they’ve been kept in this dirty derelict garage, at first in small cages, and now between these wooden palettes with cobwebs over their heads and dirty sawdust and their own faeces under their paws.

4. The space they are in is no bigger than 2m X 1m and there is also a fox terrier sharing the same space with them. This is the legal requirement for one dog of that size not five.

5. For six whole months, these puppies have never seen the light of day, have no source of natural light in their pen, and have never been walked or played with.

6. The puppies as well as their parents and the fox terrier are fed a mix of cheap dry food and wet stale bread.

Pressing pause but moving at full speed ahead