The chaining of dogs to a stationary object is still legal in Malta in spite of it being banned in the majority of EU countries which view the practice as cruel.

In 2016 PN MP Mario Galea put forward a private members bill calling for a ban on allowing dogs to be chained up for long periods of time and on collars which may restrict a dog’s breathing. 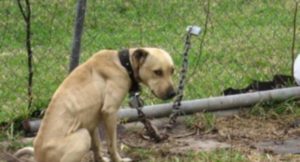 An agreement was reached between Galea and Camilleri about the bill and the bill was to be presented once again to parliament. Unfortunately, to date, no bill has been presented. Camilleri even promised Galea that the Bill would be tabled before Parliament adjourned for the summer.

For more disgusting dillydallying details, which explain why so many dogs are still chained in the scorching heat in a field near you, read this