Don’t make me pull out my magic wand 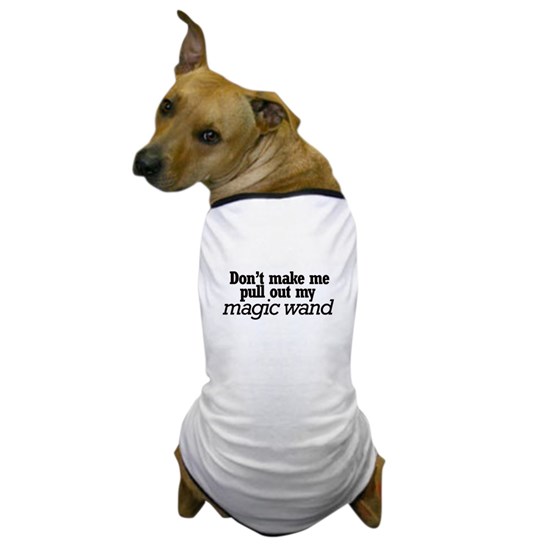 There are many reasons why I advocate so strongly for animal rights but the first and most important one is that no matter where you go in the world – from the richest to the poorest of countries, from the most under developed to the most modern – animals are always the most extreme underdogs.

Wherever you go, animals are voiceless and hence the most vulnerable, even more vulnerable than than the poorest human and the unluckiest child.

I usually get blasted for comparing animals to children, and even more so when I say that animals are more vulnerable than kids.

But I stand by this conviction, through and through.

But when you report a young dog that was thrown alive in a skip and left to die in an area that’s heavily surveyed by CCTV cameras, and then, after months of chasing, you ask The Commissioner of Police for an update about the situation, the best you’ll get is this.

I’ve reported hundreds of cases of clear abuse or neglect towards animals, but lo and behold, only a handful were found to be in breach of the Animal Welfare Act.   And even in cases were a breach was being committed, most owners were given warnings and chances to clean up their act, they got to keep their animals and no charges were pressed.

Now, as you know, I’m a strong believer in social media – because if used right it can do wonders. It helps in putting pressure on the authorities and it helps in finding loving homes for our abandoned strays. This week we managed to home a grown cat within an hour of finding him and just hours later, again thanks to social media, we found not one, but two fosterers for an abandoned dog – a dog that Animal Welfare refused to pick up despite him being so underweight that his ribcage showed through his skin.

The list goes on and on… the success stories that were only possible thanks to social media are endless.

And people choose to tell you, instead of the authorities, for four reasons:

And people are are not wrong to fear these things. In fact, we have come across all four scenarios way too often. So whilst I don’t blame anyone, it is important for everyone to acknowledge that animal activists like myself don’t have a magic wand to solve these things.

We don’t have a place where to home or foster all the dogs we find in the streets and which Animal Welfare refuse to pick up; we don’t wave a crystal ball to find fosterers, carers and adopters; and when the law is being broken, we still have to go through the official authorities to get things done.

We do not have the legal right to carry out inspections ourselves, and as blatantly obvious as it might be to anyone with half an eye, we do not have the authority to decide if a breach of the animal welfare act is in fact going on. Sadly, we too depend on the over-stretched and under-resourced Directorate of Animal Welfare to do their job and to hopefully do it right.

Most often than not, when we take on a case from someone who contacts us about a case of neglect or abuse, we inform Animal Welfare, who assure us that an inspection will be done soon. In most cases, after chasing them like a dog on heat, Animal Welfare come back with this sort of frustrating reply. 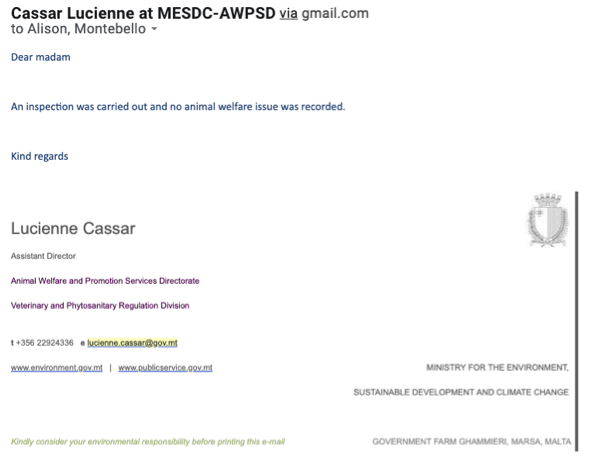 What do we do after that?

Like every animal lover, we worry, we lose sleep and we wonder, how in God’s name could there not have been a breach of the Animal Welfare Act, when a dog is chained for most of the day, or when there’s no window or fresh air in the place where the animals are being kept, or when a dog cries all day and all night in desperation?

So we push, and we try to get more answers from Animal Welfare, but the department constantly claims this to be ‘privileged information’. When the situation is desperate activists put their lives and their families’ safety on the line and organize their own investigation. We then resort to social media for help and hope for the best.

And that’s where we stand ladies and gentlemen. So when you contact me or any other animal activist about a case of neglect and abuse, please keep all this in mind. We are not there for you to off load and rant. We are there to help YOU take action. And whilst we will help the best way we can, we are not miracle workers. We have experience and we might have better contacts and knowledge, but that’s all we have – no more no less – we need everyone’s help to keep doing what we’re doing.

Rant over, but I am still really desperate for good vibes and help. So please if you wish to help out as a volunteer (walking sanctuary dogs), by fostering, adopting, or to donate food or money for medical expenses or any animal cause, contact me here .