Can somebody donate a cheap camera to Animal Welfare ? 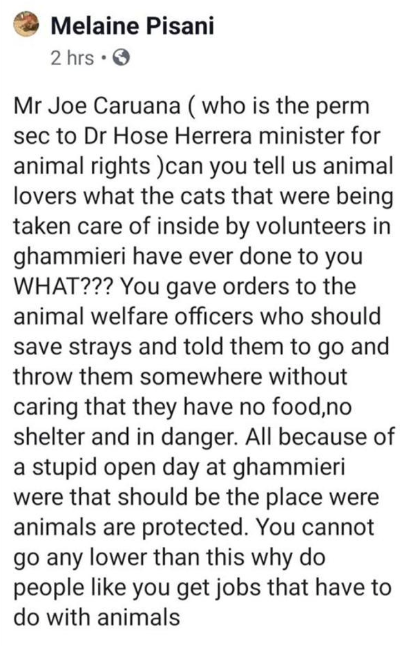 Not being one to report something without verifying both sides of the story, I immediately wrote an email to the Director of Animal Welfare Noel Montebello, copying his assistant Lucienne Cassar, Commissioner for Animal Welfare Mag Denis Montebello, Parliamentary Secretary Hon Clint Camilleri and the Gov Spoke’s Person Sean Schembri for a clarification. My email read as follows :

Dear Mr. Noel Montebello
As you are surely aware, yesterday a Facebook post  about cats being trapped from Ghammieri’s grounds by AW officials, started doing the rounds (see screenshot below).
This morning, I followed it up directly with the source (who is not the person that posted the post) and this is what I found out.

Mr. Schembri, please consider this email as your opportunity to give your side of the story.

Within a few minutes I got an email back from the Government’s Spokesperson Sean Schembri.
It read as follows :

Thank you for your communication. We would like to take this opportunity to clarify the misconceptions being circulated and categorically state that there is absolutely no relation between the stray cats being relocated for their wellbeing from the Għammieri Experimental Farm and the Open Day taking place next Sunday.

Over the past weeks a group of stray fox terriers were noticed at the Għammieri Experimental Farm chasing stray cats, hence why it was deemed appropriate to trap the cats and relocate them to a more appropriate area until the fox terriers are located.

In fact, during the past days a cat had to be taken to APH and another one placed in the cats compound at Għammieri. The general direction has always been to exercise proper care and diligence in the treatment of all animals.

Of course, I thought this was a lame excuse because common sense would dictate that to solve such an issue, it’s the Fox Terriers that needed to be trapped and not the cats. Having said that, I gave Animal Welfare the benefit of the doubt (or more rope to hang themselves with), and replied as follows :

Thank you for your reply Mr. Schembri.

Exercising proper care and diligence in the treatment of all animals would require that in this case, AW works hand in hand with the feeders who have been caring for these cats for years.

An hour later I got yet another email, this time from Parliamentary Secretary Hon Clint Camilleri. The email read as follows :

Im informed no cat was put down.
You may wish to contact the director to show you the cats.

Clearly we had yet another ping pong game on our hands, so I replied again, as per below:

As you can imagine I am not in a position to identify the 15 cats in question as I am not their feeder.
In addition my sources would like to remain anonymous as they fear repercussions from the Directorate.
This means that approaching the director themselves is not an option.
However, if AW knows exactly where these cats are, it would take a few minutes to take photo of each and send them through to me.
My sources will then verify if they are the same cats or not.
You have taken the trouble to issue a public statement to clear the Directorate’s name, but the well-being of the cats is the proof of the pudding.
Thank you, I await the photos
Alison
www.iwillnotgoaway.com

Suddenly the whole directorate, the Gov’s spokesperson and even the Parliamentary Secretary, went silent. It’s now been 8 days and it seems that Animal Welfare cannot, for the life of them, locate a camera to take some photos.  I have since sent two reminders but my experienced guess is that they will try to shove this case under the carpet by not replying. This has now become their modus operandi and unfortunately a culture of impunity is letting them get away with it whilst more animals suffer and face horrid fates.

In the meantime, we still don’t know what happened to the 15 cats that went missing over a weekend.

If you would like to lend a helping hand, please write to the Commissioner for Animal Welfare and ask him to investigate this case. His email is [email protected]

For the original screenshots of the email correspondence click here