The temperature is rising and the hot summer months are here, so The Animal Welfare Directorate has produced and distributed these educational fliers to educate the public about the dangers of leaving dogs in hot cars. 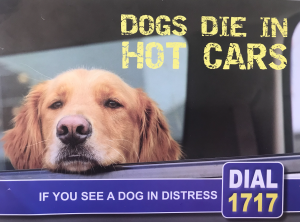 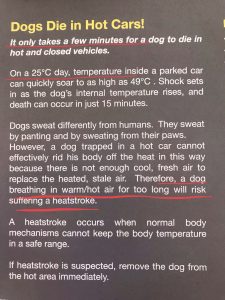 The fliers say the following :

“It only takes a few minutes for a dog to die in hot and closed vehicles.  On a 25 degrees Celsius day, temperature inside a parked car can quickly soar to as high as 49 degrees Celsius. Shock sets in as the dog’s internal temperature rises, and death can occur in just 15 minutes. “

The second part of the flier says :

“If you notice a dog in a car on a hot day for more than 15 minutes call Animal Welfare on 1717 and/or Police on 112 to report the incident and inform them if the dog appears to be in distress.”

All this is true, and it is truly commendable that AW are trying to educate the public about the matter, but guess what happens if you actually call AW on 1717 to report a dog in a hot car. 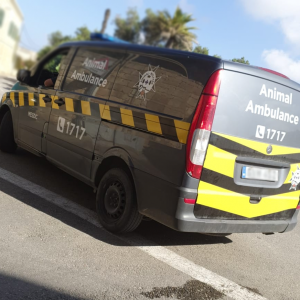 If AW turn up at all, they take the dog out of the hot car, and PUT IT IN A BURNING HOT AIRLESS CAGE AT THE BACK OF A WINDOWLESS AMBULANCE!

AN AMBULANCE THAT HAS NO VENTILATION AND NO AIRCONDITIONING!

AN AMBULANCE THAT HAS NO SOURCE OF LIGHT IN THE BACK, SO WHEN THE DOORS CLOSE ON THE INJURED OR SICK ANIMAL, IT IS IN ABSOLUTE PITCH DARKNESS!

AN AMBULANCE WHICH IS ESSENTIALLY A HOT TIN BOX THAT CAN REACH TEMPERATURES IN EXCESS OF 70 DEGEES CELSIUS!

AND given the traffic situation in Malta, plus the fact that our Animal Ambulances do not have a siren, even in the best case traffic scenario, the chances are that the dog will be back there for much longer than 15 minutes; much much longer in fact. 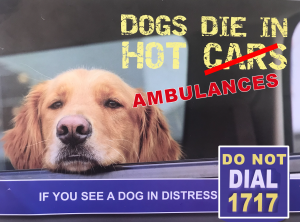 The issue was first pointed out to all these people last year, and AGAIN this year starting from last April to give them the time to make amends before the hot summer months. We are now in June.

ALL the authorities that we’ve spoken to unequivocally agreed that an airconditioning needs to be installed at the back of the animal ambulances.

AND, all the authorities said that they’re working on it, but to date, the situation is still equivalent to that of a third world country making Animal Welfare “unwitting perpetrators of cruelty” just as Magistrate Denis Montebello said last week, in his interview with The Times of Malta. 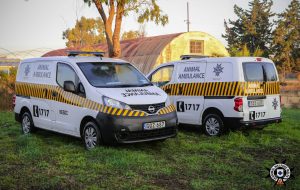 Animal Welfare also own these white ambulances, but the airconditioning in these also does not work well and these ambulances are almost never used for rescues; they are used to transport animals for follow ups from AW to APH and back.

Gozo’s Animal Welfare on the other hand, have got their shit together, with a state of the art ambulance and a rescue service that runs like a charm!!!

So these questions beg to be asked :

If you would like to contact the authorities on this matter, these are the people who ‘should’ have the power  to do something. I say ‘should’ cause I’m starting to doubt this myself.