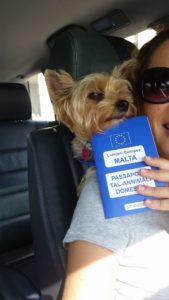 As some of you might have noticed I’ve been silent for a few days. You see, after three years of not leaving this rock because of our little Suki, last weekend we went to Sicily for a short holiday, with Suki in tow of course.

We figured that despite the restrictive pet policy that most airlines have (including Airmalta), a 30 minute flight would be manageable, no matter what.

Except that it wasn’t. Here’s why : 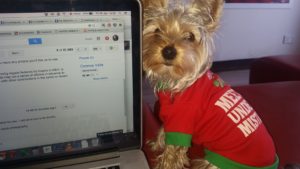 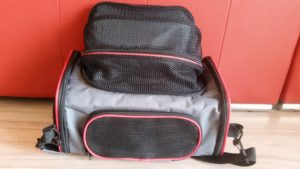 2. This bag measures exactly 40cm X 34cm X 20cm (as dictated by the airline) and weighs less than 1kg. This means that with Suki inside, it weighs a mere 5.2kg (well within the airline’s 10kg limit.) 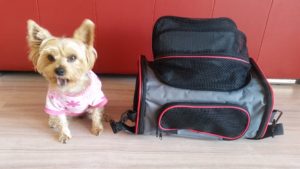 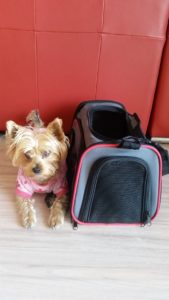 3. This is Suki standing and lying down besides the airline approved bag.  As you can see, it’s going to be a tight squeeze even for a small dog like Suki. 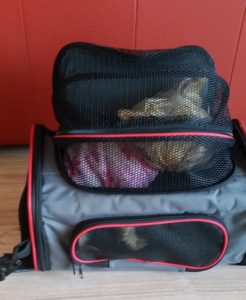 4. This is how Suki fits in the airline approved bag when it’s closed (the way it should be for air travel). As you can see there is no head space, and certainly no space for her to turn around freely. 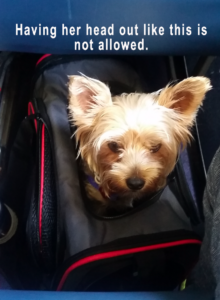 4. Throughout the flight (whether it’s half an hour or three or four hours), it is absolutely forbidden to open a part of the bag to let her head, or any part of her body out.  So if she wants to lie down she has to have her face pressed against the mesh on the side of the bag.

5. In the video below you can see Suki  trying to turn around in the airline approved bag. Please note that in this video she is highly motivated to turn around because I’m offering her a doggie treat, and yet after a few attempts she still doesn’t manage, not even when I open the side zip, which on a plane is absolutely forbidden.

6. This policy does not apply to service dogs and guide dogs. Rightly so these dogs, no matter their size, are allowed to walk on to a plane with their owners without being in bags or carriers. And by law they are allowed to sit next to their owners and in some cases (therapy dogs) even on their laps.  So if you’re thinking that the current shitty restrictions on small dogs are because of potential allergies from other passengers, think again.  If this were the case then the law would not allow for service dogs and guide dogs to be in a plane cabin with their owners.

7. Also note that infants under the age of two are allowed to travel on their parents laps (not on a seat) for FREE.

So, what’s the point that I’m trying to make here? What reasonable solution would I like to see come into place ? 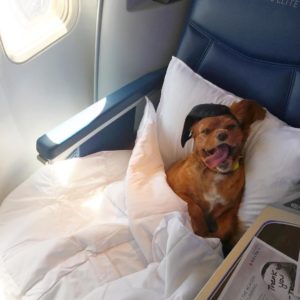 Of course I would love to live to see a day when I can buy a normal seat for my well-behaved pet and have her sit next to me unencumbered by bags and other restrictions. I would gladly pay double the amount to have her as comfortable as the dog in the picture during our travels, but I know that this is a long shot and too much to ask from so proclaimed ‘animal loving’ airlines.

But if I’m already paying  €140 for my pet to travel with me, then the least she should get is some decent space . The space near my feet is mine.  I’ve paid for it with my flight ticket. So if I’m paying extra for my pet, then the airline should allocate extra space for her, and it should be space that is normally up for sale (not the kitchen cabinet or the space meant for my feet). 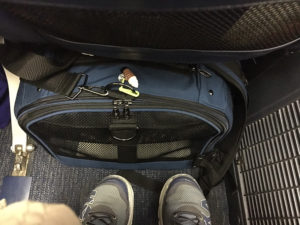 This is the same logic that is applied when it comes to infants – this is why children under 2 years of age travel for FREE if they sit on their parents’ laps. Simples – they don’t occupy additional space that could otherwise be sold, so they travel for free.

If for the price of €140 a human gets hand luggage privileges, extra luggage space, a snack, and on some airlines even extra leg room, then pets should at least get SPACE which would allow them to stretch a little – is this too much to ask for ?

Pets should be designated a human seat, because even if they are still closed up in a carrier bag, having them on a regular seat would make a huge difference. 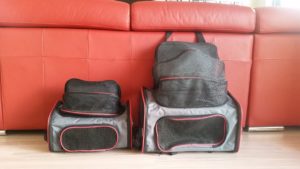 1. On a human seat the carrier bag can be bigger. Whilst under a seat the bag can only be  20cm deep and 34cm high, which makes it practically impossible even for a 4.5kg dog to turn around in, on a human seat a bag could easily be 40cm deep and with practically no height restrictions.  Have a look at the two bags in this picture. The small one is the airline approved size that would fit under the seat in front of you, whilst the larger one fits easily on a human seat.  Can you imagine the difference in comfort for the pet especially on longer flights ?

2. It’s fair – when I pay €140 for my pet to travel with me, I expect an airline to cater some space for it.  By having me put my pet between my legs, at my feet, the airline is not giving me anything back for my buck.  If no REAL space is allocated, then it’s a complete rip off.

A call to Airmalta’s customer care centre asking if I can purchase a human seat for my pet, was met with a stark downright ‘no’.  When I asked ‘why’ I was told in not so many words, that I should be grateful that Airmalta is one of the few airlines that allows me to travel with my pet in the first place. 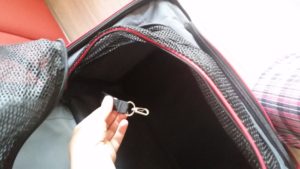 3. And finally, if having a human seat allocated for my pet, even when I pay €140 for it, is utterly beyond an airline’s imagination and care policy, then we should be allowed to keep our pets, closed up in their bags on our laps.

If we can keep babies, laptops (that can crash planes) and other bags on our laps, then we should be allowed to keep our pets, in their bags on our laps too.  If the worry is that the dog would jump out of its bag and run havoc in the cabin, then it should be noted that dogs are also tied down in their carrier bag, making this possibility a complete impossibility. (see picture)

So now,  whilst we wait for mentalities and airline policies to update themselves; whilst we wait for airlines to stop treating people traveling with their pets like second class citizens, we’ll keep having to choose between leaving our beloved pets behind or squeezing them in a space that’s not even fit for big toes, let alone living, breathing, feeling creatures – our beloved pets.